Prior to teaching, I spent over a decade as a manager in retail, in various different roles including as a Store Manager and a HR Manager. This gives me an insight into this ‘big, wide world’ that we try to best prepare our children for.

My issue with the education system as it currently stands is it doesn’t relate closely enough to the real world. Talking from personal experience, I was never once judged on my ability to do a job purely by the numbers I delivered. Sure, I had KPIs or performance targets to hit, but very often I didn’t hit them. Does that mean I’m a failure as a manager? Should I be sacked because I missed my sales target yesterday? Or replaced because our customer service measure dipped below 90% last week?

Of course not, that sort of world would be chaotic, stressful and downright ludicrous.

Although one only has to look at the average lifespan of a football manager to know that there are industries in which this is the accepted rule. Thankfully, they are the exception, not the norm.

The big wide world, for the most part, will not grade your contribution to society. Yet, we put our children through an education system teaching them that everything comes down to a result, a grade, a mark. We insist on labelling and categorising children according to test results, or marks achieved against a matrix. But do we ever tell them how they could improve? Do they know exactly how to move that 60% score to 70%? Do they even know what they did so well to achieve that A grade?

Correct me if I’m wrong, but my rudimentary understanding of the human brain tells me that as humans, we have no inbuilt system that lets us know what we could be doing better or how to do that. Indeed, we rely on feedback from the environment and people around us to become better. I am in no doubt that we need interaction with other humans, preferably face to face, in order to help us improve.

When I think back, I improved as a manager because people who had better knowledge than me were honest in their feedback, gave good advice, suggested ideas to help me move forward and – crucially – told me what I was doing well.

Knowing that I delivered a customer service measure of 88% alone does none of those things. But the feedback I get based on the result? That’s when the real learning happens. What can I do better next week? How can I move that score to 90%? What would I have to do to get to 92%?

The other interesting point that became apparent to me is that children leaving school and going into the workplace were not used to receiving critical feedback based on their performance. In my experience, they wanted a target, for instance a time limit in which to complete a task, but would often take offence if I gave feedback based on the quality of their work. It was quite obvious to me that these young people were not used to being told how to be better, and I have a real problem with that.

I have read widely on this issue, considering the benefits of giving grades versus the strengths of formative feedback. An interesting article popped up on my news feed last week, and both the issue itself and the location in question caught my eye. The BBC reported on a decision by Royal Welsh College of Music and Drama, based in my hometown of Cardiff, to not give first year students a grade or mark. You can read the article here http://www.bbc.co.uk/news/uk-wales-south-east-wales-44179515.

The belief is that this move will reduce stress, and improve well-being. Crucially, the report indicates that students had (and in my experience, do) focus on the mark rather than how to improve by developing their knowledge and skills.

Is this simply because these same students have been brought up in an education system which tells them that the grade is ultimately paramount?

Now, all of my examples here are based on the adult world, either in the world of work or higher education, but remember this is the world we are preparing our children for, and at the end of the day, are children in schools any different? Do they still need to know how to improve? Do they still look at a mark or grade and judge their ability in relation to their friends? Do they label themselves as either ‘smart’ or ‘stupid’ depending on one number or letter received from the teacher?

I would love to be part of a system in which children don’t know their levels, grades or marks. A system in which teachers could focus on giving high quality formative comments to move the learning forward, rather than scoring a paper and reducing a huge amount of work, effort and toil to one letter or number. 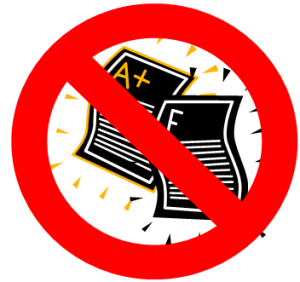 Of course, I’m not suggesting that children should go through their whole lives without facing summative assessments. Even in Scandinavia, learners will be summatively assessed at some point in their school lives. But why can’t we teach children that everybody has their strengths, everybody can improve and everybody can become better if they’re open to receiving feedback?

After all, if we don’t teach it in schools, the big, wide world will teach it the hard way.

I’ve made my feelings clear, but what do you think? Contact me @MrHannUSW and tell me your thoughts on the summative assessment versus formative comments debate.

Right, pencils down. That’s the end of our time. Until next time – hwyl fawr!